FIRST TEST AT THE FANCY CLINIC

I went back to The Fancy Clinic to take a bunch of tests. Besides blood tests, I was scheduled for two big tests that pretty much checked to make sure my fallopian tubes were open and that my uterus didn’t have polyps or anything that would impede implantation.  Each of these tests was over $1000.

I knew the basics about how babies were made. Well maybe I knew a little more than the basics, but I was certainly not an expert on fertility. I didn’t really know what I was getting myself into and I was trusting that I was in good hands.

I was trying to go in with a good attitude. Just because I didn’t really like the doctor or the assistant as people, didn’t mean it wasn’t a good place.  I was going to get pregnant!

I gave the receptionist my name and she checked the computer. “They have to do a urine test so you need to go pee in a cup,” she told me.

I started to the bathroom when an Ultra Sound Tech called my name.  This place was huge. There were new faces, doctors, nurses, techs and assistants coming out of hallways at all times.

The Ultra Sound Tech held up a hand blocking me from the bathroom, “You don’t have to pee in a cup. I have to do an ultra sound.” She was a no-nonsense type.

“I do have to pee in a cup,” I said, “I’m having another test after the ultra sound where they need to have a urine test.”

The Ultra Sound Tech laughed condescendingly,” Yeah, I’m sure.” She tapped a chart indicating that she had all the information in her hands. She was tall and blonde and reminded me of one of those overly serious soap opera doctors.

“OK, but I still have to go to the bathroom.” I told her.

When I finished in the bathroom, the Tech was waiting for me and walked me into an ultra sound room. I removed my clothing from the waist down and sat in the chair. She stuck the fallace shaped thing in me and there on the TV, was my uterus.

“Wow,” I said, “That’s amazing. What is that?” I was indicating a roundish shaped grey thing on the screen.

“Um, could you explain to me what I’m seeing? I’m just really curious.” I said.

“Just an ultra sound to see what’s going on,” she mumbled.

“Yes, I know,” I said. “But what are you looking at right there?” I pointed to the screen.

“Just your ovaries and uterus.”

“I know, but… could you just point out what I’m seeing up there?” I asked again.

She ignored me as she made notes.

“I like to know what’s going on,” I persisted.

“The doctor will analyze these,” she said. “Just get dressed and go wait in the lobby.”

Why wouldn’t she tell me anything? Was there something bad?  Was she just unfriendly?

Later I would find out that this ultra sound was $400. You’d think for that price I could also get a little narration.

I waited in the lobby for a half hour before Linda, Dr. X’s assistant came by.

“Where’s your urine sample?” she asked me.

“The woman who did my ultra sound told me I didn’t need it?” I told her.

A parade of techs, doctors and nurses go by. I couldn’t find mine.

a parade of doctors and ultra sound techs

“Well you do need it,” Linda said. “We have to do a urine test to make sure you aren’t pregnant before we do the HSS.”

This was the beginning of the realization that no one here knew what was happening  and no one ever actually read my chart. Ever.

“You can’t tell if I’m pregnant from my ultra sound?” I ask.

It was actually a real question. Couldn’t they tell if I was pregnant from an ultra sound? I was curious. Maybe Linda didn’t know the answer.

“We need the urine test.”

“I already used the bathroom. I have nothing left to give,” I said.

Linda nodded and walked away. She came back with a bottle of water. “Just bring me the sample when you are done. Come find me.”

Come find her? In this huge place? I was already feeling lost and misguided. I drank my mini bottle of water and it occurred to me that they don’t have a water cooler here for their nervous, stressed patients who are spending a fortune for these tests, that their insurance doesn’t cover. Wouldn’t it be welcoming and nice to have a water cooler? 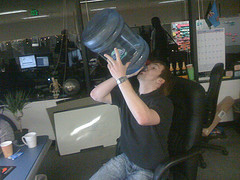 Almost a half hour later, I was ready for the HSS test. Linda showed me into a small room where Dr. X was waiting.  I was not happy to see him but I pretend to be happy. I pretended, to myself, to trust him. But I felt pretty uncomfortable with him touching my body, even though Linda was there.

I asked him to explain what he was doing as he went along.

He didn’t seem too happy to be narrating but he simply said he was filling the uterine lining with saline to make sure it was smooth.

The whole thing lasted about five minutes and it was uncomfortable but not painful. It felt a bit like having mild menstrual cramps.  When the test was over Dr. X said, “Everything looks good.”

I got through it. Dr. X never really said my name or made any reference to our consultation, so it almost felt like this was our first meeting. Did he even remember I was single? Did he remember the hysterical hemorrhoids?  Did he care?

This entry was posted in THE FANCY CLINIC, TRYING TO GET PREGNANT. Bookmark the permalink.