It’s the craziest thing to be newly pregnant and not be able to tell anyone; especially when you are SUPER sick and have to go to work!

Yes, just as my morning/all day sickness began, I got a job.

I work as an actor, writer and producer and I take work when I can get it. For about ten years I’ve been working with a great production team. We made a movie together in 2003 and now, we make TV as often as we can. It just so happened, now was one of those times. We were shooting a pilot for a large cable network. It was very exciting, even though I felt like I had the stomach flu every day.

It would have been awesome to walk in to work and say, hey guys, I feel like crap so I may lie down from time to time and please don’t eat anything smelly in front of me and please be understanding that I’m starting to feel exhausted. But I couldn’t say these things. It was my choice to keep the secret. I was afraid my friends would be so excited that they’d tell others and if this baby didn’t end up making it….

Our office was far away from my house. It was in the DEEP valley in a neighborhood that made me a bit nervous. I took a windy canyon over the hill, which made me even sicker for most of my early drive. I’d heard a rumor that an NBC show, like My Name is Earl had their production offices there, but I couldn’t believe it.

Our show had about 2/3 of the floor, with the other offices being used by businesses that might have had something to do with selling posters of women in bikinis sitting on cars, or else, that was just their decoration of choice.

I was an associate producer on the project. The office I shared had a slanty roof. I happily took the strangely small desk in the back, under the low roof thinking that I might be able to get away with little naps if I were shoved in a corner. 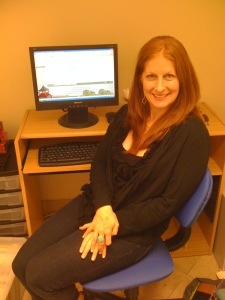 As days went on, I tried new ways of curbing my sickness; pressure point bands, working out, eating all the time, eating sugar, ginger candy, peppermint. The combo that seemed to help was this; go to bed at 9 (not a problem because I was EXHAUSTED,) wake at 7 and work out on the elliptical (keeping my heart rate under 140,) make a huge peanut butter banana protein shake and then eat all day long. Since I was repulsed by most foods I was only eating; cheese, bread, peanut butter with apple and saltines. I kept the saltness hidden because I knew my close friend and co-worker Tim could figure it out, he like Nancy – another best friend I work with, knew it was time for me to think about having my baby. And Tim would know that I don’t normally eat saltines. (I actually found that waverly crackers and rice cakes worked well too.)

One day at work, I went down the hall to use the bathroom and smelled pot. Marijuana.

I will say this: I’m not a fan of pot myself, but if people want to smoke it at home, you know, whatevs… but at work??!!! Where I can smell it!!?? And I’m PREGNANT!!!!!! The ragey hormones kicked in right then and there. I covered my mouth and ran down the hall. I was mad. “Does anyone else smell pot?” I yelled to my co workers in the other offices. Some did and some didn’t. I ranted about it for a while and then let it go.  I mean, as someone trying to appear not pregnant, I had to stay cool.

Over the next few days, the pot smell would waft into our office and I’d have many a freak out. Tim, trying to be helpful, brought some Lysol to mask the smell and as he sprayed it, I had another freak out, “Lysol isn’t air freshener!” I yelled on the verge of tears, thinking of my baby getting all those chemicals. I wanted to scream, It’s not the smell! I can’t be on drugs because I’m pregnant!
After it was clear that pot smoking happened everyday in one of the other offices, I had a talk with our production manager. I decided to use the angle that it was very unprofessional for the actors who were coming here to audition.”It makes us seem less legit,” I told her. I said less legit because I certainly would have been wary going to this crazy office.

The production manager agreed and talked to the building manager, who as it turned out, didn’t want to deal with the pot issue, because I guess the bikini car poster people or whoever were good tenants and we were just temporarily visitors.

I was losing my mind. I was NOT going to jeopardize the health of this baby!! “I have a medical condition,” I told the production manager. “I’m VERY allergic.”

So, because of my medical condition, the building manager ended up spending a lot of money to change the air vents instead of just asking the tenants to stop smoking. This didn’t change much. I still smelled pot.

I called my OB and asked her if the fetus could be hurt by the pot in my office. (Seriously, who has to ask this?) She said unless I myself was feeling high, it would be OK.

Of course, every time the pot would waft into the office or I’d step in the hall, I’d instantly feel buzzed and light headed and freaked out.

Then, I did this.

I wore it everytime I caught a whif of the weed. Nancy even started wearing one because the pot was making her a little sick too. Everyone thought this was a good way for me to deal with my terrible allergy. (I’m sure everyone except Nancy did think I was a little crazy.)

This entry was posted in FOOD, PREGNANCY. Bookmark the permalink.

1 Response to SICK AND HIGH