One time (when I was 40 and single)I went to meet friends at a party. The host of the party came over- Craig. I’d never met him before – he was really cute.

“Your friends were telling me all about you before you got here,” Craig smiled at me.

I worried that I didn’t live up to the hype.  After all, I’m quite flawed.

Craig and I chatted for a bit and for the next hour or so, he made a point of visiting with us.

“You two should go out sometime,” one of my married friends said loudly and drunkly.

My other friends chimed in with approval. I was pretty mortified.

“Well I was just about to ask for her number, if you give me a moment,” Craig said and then turned to me, “Would you like to go out sometime?”

I gave him my number and all my married friends about lost their minds with excitement.

Craig called the next day and told me how much he liked me. I was a little turned off that he was so interested. Yes, that’s right, I was Dubious. Concerned; I’d only met him once!

We made plans to go to a trendy cool place.  When I arrived, he stood up as I sat.

I ordered a nice glass of wine and then he quickly gave the bartender his credit card.  No funny business with me reaching for my wallet.  That earned him points, though I was co dependant about him paying, after all, I knew he worked in a bar, himself. I always feel bad about my date paying and yet, I want them to… This is one reason why I don’t believe a first date/blind date/internet date should be for dinner. 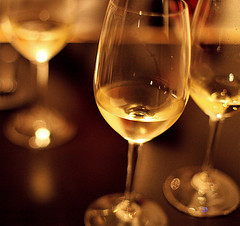 We had a great conversation over our wine. He was very smart and liberal and well-traveled and so cute… but… there was something… not there.  I just wasn’t feeling it.  I kept yelling at myself in my head to Feel Something and Be hot for him. It had been way too long since I’d had any good lovin….

Why was I not feeling it for Craig? There was nothing wrong with him. He was great and really attractive.

After the date, he walked me to my car. “I’d love to see you again.”

I said it would be great, though I didn’t really mean it – but I wanted to mean it. He leaned in and kissed me.  I didn’t want to kiss but i decided I’d just give it a try. Maybe some sparks would go off (that’s totally happened to be before where I kissed a guy I wasn’t into and then while kissing felt a fire in the loins.)

So, we kissed and it turned into make out and I knew- I was not into him. On top of that, his breath was sour; I kissed him as long as I could.

He called the next day and I felt sick to my stomach He had that excited we shared something special tone in his voice.  “Do you want to do something tonight?” he asked on my voicemail. Tonight?

How is it that some people get into these fast and furious romances that both people are totally into? They just jump in and fall in love and can’t wait to be together every second? I think that may have happened to me once, like in my early 20’s and then the guy dumped me just as I thought I was in love.

But Craig seemed genuine- he seemed different from the dark, brooding, troubled, moving vans of baggage types I usually liked… the ones who made me so miserable I’d drop a quick 10 lbs in a month.

Was I bitter? Realistic? Pessimistic?

The truth was, I was OK being single. Actually, I was great. When I really looked back on my life and my boyfriends, I can never really say I was happier when I was in relationships.

The idea of having a baby on my own was getting stronger. Taking the first step still seemed so hard, but the idea of not being in a relationship for a while wasn’t bothering me at all. I was ready for a new kind of love.

This entry was posted in ABOUT, DATING, MOM STUFF. Bookmark the permalink.

4 Responses to CRAIG…. A DATE