For my 100th post I want to say thank you for reading. I hope I’ve given you some laughs and some inspiration.

So here’s my 100th blog post gift to you, Mom Solos and those Mom Solos to be, I give you this: 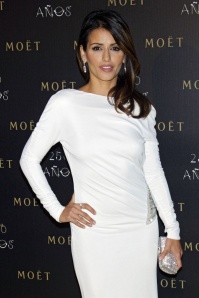 Monica Cruz, one of the most beautiful women in the world, is single and pregnant by an anonymous sperm donor.

Not that we should compare ourselves to gorgeous, famous women, but I love her for coming out with this news.

Any woman can be single for any reason- single women can also have real lives and feel whole and happy. I can’t even count the number of times people have said to me, don’t worry, you’ll find someone, what’s wrong with these guys? or you are such a catch. I guess people think they are being helpful by saying these things, but it actually makes me feel like they think something is wrong with me or that they think I’m incomplete. There is still the mentality that women are waiting around for a man to choose them. When I was 39, a guy I knew actually said to me, “I can’t believe no man has ever fallen in love with you.” It was appalling; as if any guy had fallen in love with me, I’d have jumped at the chance to marry him. Like its just up to some man to pick me. I’m sure he meant it as a compliment but….
I had to explain that perhaps I hadn’t fallen in love with anyone myself. He seemed shocked by my response and then did one of those slow nods like he had never even considered such a thing. (Ironically, he hit on me a little later, and yes, he was married.)

I was lucky that I had enough strength not to let all the why aren’t you married comments bother me too much. Now I just want to go back in time and shrug and say to everyone who couldn’t understand why I wasn’t married, “if its good enough for Monica Cruz, it’s good enough for me.”

Choosing to be a Mom Solo is by far the best thing I’ve ever done. I feel confidant that Monica Cruz will feel the same way.

Congratulations, Monica! You and I are so alike (again, not comparing myself to a gorgeous, famous celebrity, but…)

This is her blog – it’s in Spanish.