I had the whole day planned; Trader Joe’s in the morning and then the children’s play space that we are members of, but rarely go to. This play space is great – close to my house, clean, safe, fun activities and free for us because Dan bought us a membership there as a gift! But every time I get it together to go… something goes wrong. Usually it’s closed. It has weird hours.

But today, it was open. I had checked on line and everything.

This happened at Trader Joe’s:  “Mama!!” ~Spenser, pointing to the mermaid.

So after Trader Joe’s I drove to the play space. “Do you want to go to the place with the balls? Where you jump into the balls.” I asked Spenser. “You know the ball pit with the balls that are blue.” I just couldn’t bring myself to say blue balls.

“Yeah!” he said. I thought he probably didn’t really know what I was talking about since we hadn’t actually made it inside there in a while, but the words BALL and JUMP were enough.

We pulled into the parking lot and I saw lots of other moms and kids heading in. YES! I’m awesome. It’s open.

“Wanna play in the water and jump in the balls and play with the trucks?” I said confidently.

I wasn’t going to be a tease about the blue balls this time.

This place is in a building with a lot of security – your car is checked in the parking lot and you have to go through a metal detector at the front. When we went through the front, there was a line to get into the play space. I recognized the woman at the desk. She was helping someone choose a membership package and then there were a few more people behind. It was going to be a while. Spenser ran to a few attractions in the lobby as I dug in my huge bag for my wallet – might as well get my membership card out now. Spenser ran around excitedly pointing at things, remembering where we were and I kept digging. Where was my wallet? Oh God. I didn’t have my wallet? WTF? Seriously – What the F???? My wallet was not there. Where the hell was my wallet but more importantly was I really going to disappoint Spenser again? No! I couldn’t!

I ran through my options as the line got shorter.

1.Run home, look for my wallet and come back, if I found my wallet. This would involve a lot of screaming if we left right now.

2.Tell the woman at the front what had happened and hope that she remembered me and let me in – even though I didn’t have ID on me. (I didn’t know if they had a record of my membership. It’s kind of the old fashioned, show your ID kind of place.) If she said no, then go home. see #1.

Spenser pointed to the entrance. “Go!” he said emphatically. My heart broke. My love for him and need to delight him with jumping into balls overwhelmed me and felt like I had to get him in there NOW or else I was a horrible mother…  I decided to do option #3 – sneak in. I’m a paid member! I told myself. It’s not like I’m teaching Spenser to be a criminal. Is it? Were there tons on video cameras here? Was there as much security inside as out?

When the woman at the desk was talking to someone, I snuck us in. It was pretty easy. As Spenser ran into the playroom, I looked over my shoulder, like a fugitive. I tried to keep my arms crossed so no one noticed I didn’t have a hand stamp.

Spenser played and jumped and had the greatest time, as the guilt got to me. I thought of  possible ways I could get out of this, if I got caught… Play forgetful: Oh sorry, I forgot to check in. Play dumb: Oh, do I have to check in even if I’m a member? After many different ideas, I decided that the best option would be to cry. I’d just cry and explain how I was a member but didn’t have my card and didn’t want to torture my child by making him leave. I’d appeal to their heart and cry. 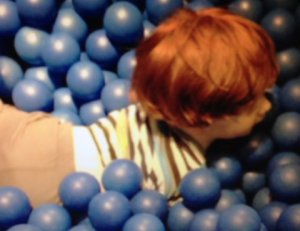 S was having a blast jumping in the ball pit again and again. We played for almost an hour sans incident. I really kept expecting to get in trouble. What if I got kicked out and asked never to return? As Spenser ran from activity to activity, I got more and more paranoid and I tried to plan my exit strategy: leave with a large group, wait till no one is at the desk… ugh. I just felt bad – I’m really a do right person (maybe to a fault) and I should have told the woman at the desk my problem and hoped that she would let me in. But it was too late now.

A child had brought a plastic firefighter hat into the ball pit area and Spenser put it on. He was just about to do a head dive into the pit when I stopped him. “Spenser! You need to take the hat off before you jump in. You could hurt your head.”

Spenser did not like that one bit and screamed and lay on the ground and melted down.

“You can wear the hat OR jump in the balls,” I said, remembering to give choices with boundaries.

OMG! This is it. I can run out of here while he’s having a tantrum and no one will stop me. Who wants to deal with a screaming kid? No one!

I scooped S up and hugged him tightly. “It’s time to go, Love. Time to go home and eat.”

The mo peas kills me. I wanted to stop and say OK. Now I was even more guilt ridden. I hadn’t given S a warning that we were going to leave and I made it seem like his expression of feelings was the reason we were leaving. Spenser was listening to me about the hat, even though he was unhappy. He wasn’t jumping with it on like I had said. I was hating myself.

We ran into the lobby. “Mo peas! Mo peas!” Spenser screamed and writhed and clung to me, begging. I kept my focus straight ahead to the door. I decided to squeeze by a woman nursing a newborn, rather than walk by the front desk. Just as I reached the front door Spenser screamed with all his might, “BLUE BALLS! BLUE BALL!  BLUE BALL!!!!”

I don’t think I could have attracted more attention if I’d wanted to.

The lady at the desk didn’t catch me.  My wallet was in my swimming lesson bag from yesterday (duh) and my beautiful, wonderful, resilient boy was happily eating lunch about 15 minutes later.

“Blue Ball,” he said, right before he took his nap.

What would you have done? 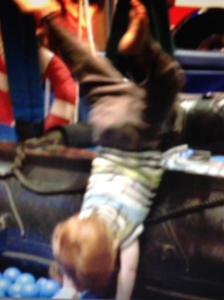