We went to music class today. I LOVE Spenser’s music class! The kids play drums and bang sticks and dance while the teacher sings and another musician plays guitar… it’s a mini concert every week.

Today, there were a few new faces. One 2 1/2 year old kid and his mother or maybe nanny. I don’t really know which, because she barely spoke English but at the same time, she seemed to be friends with one of the other moms in the group. Normally, it wouldn’t matter if she was a mom or nanny, but you’ll see why I care.

During the drum time, the teacher puts lots of different drums out for the kids to play. There are many. As the music played, Spenser happily decided he wanted a drum across the room, right by the new boy. I guess the new boy thought it was his drum, but he wasn’t playing it. He wasn’t even sitting next to it. He was curled up on his mom/nanny’s lap with a sour face.

So as Spenser picked up the drum across the room and brought it over to where I was sitting, the new boy lost his shit; screaming, crying, carrying on, pointing …. very dramatic, as if Spenser had swiped it out from under him mid play. Yeah, it annoyed me. The mom/nanny made eye contact with me like he really wants that drum. 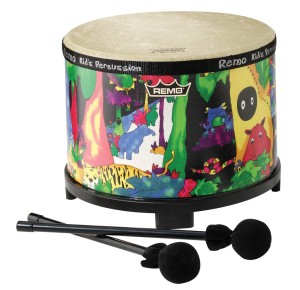 I put on a big fake smile and mouthed across the room, come share it. I nodded encouragement as the 2 1/2 year old scowled at me. The mom/nanny helped the 2 1/2 year old across to us where Spenser was happy to share the drum. The boy cried and carried on and tried to grab it, of course. “Can we play together?” I asked him.   I looked at my sweet happy boy* having fun in his class and felt so proud of him, sharing so well. The 2 1/2 year old pounded the drum once or twice and whined like it was torture. Then, in a second, the kid grabbed the drum right out from Spenser and picked it up and brought it across the room back to his seat. Spenser seemed confused and a little ruffled. The mom/nanny looked at me, as I looked to her and she said, in broken English, with a big smile, “Is that OK?”

Um, is that OK? Is that OK that your kid grabbed the drum like that or is that OK that you are  not going to tell him he can’t do that? Is it OK? Like you want me to tell you how to parent??? Because I will! I will if you ask me to…   But… I didn’t know how to respond. I tamped down that little rampage.

“Well, my son needs a drum!” I replied, not looking at her and got up (wanting to grab that drum back from the kid … but I didn’t, you guys) and found some other drum and brought it to Spenser, who played it, undisturbed.

And then, I should have just let it go, but I didn’t. You know what I did? I stared that 2 1/2 year old down. Yep. I just stared at him, as he a face like he was smelling a bag of old dead fish. He just sat there, not drumming the precious drum staring back at me. I guess you could say I gave him a dirty look. A long, dirty look. (I know, I’m horrible. I’m not proud.)

Through the rest of class, I could see the mom/nanny trying to catch my eye to smile at me. I avoided her glance.

I thought about my friend Kate and how she’s so nice and friendly to everyone. Like one time, There was a painter in my parking garage asking me to open a door for him because it was locked. I had the baby in my arms and I just couldn’t be bothered so I told him another way out. Then later, I felt guilty. Kate would have opened the door for him, with a smile.   A lot of my other mom friends are that way.

I know everyone has a different parenting/nanny style… I am going to have to deal with that better. I tried to let the drum situation go; Spenser had.

As we walked to the car, I heard Spenser’s little voice say, “Bye! Bye!” as he waved. I looked over and saw he was waving to the bratty drum snatcher.. I mean, the 2 1/2 year old. It was so sweet. Spenser is so pure. He touches my heart so deeply. I waved too. “Bye,” I called too.

Then, I took my sweetheart out for frozen yogurt. 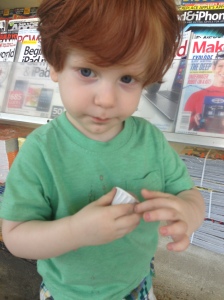 What would you have done?

*It is slightly possible that others viewing the situation would say Spenser took that kid’s drum. That’s not how I saw it… and if I had seen it that way, I would have had S find a different drum.

This entry was posted in MOM STUFF. Bookmark the permalink.