WOULD YOU RECOMMEND BEING A SINGLE MOM?

“Would you recommend being a single mom to someone who’s thinking about it?” Janey asked me.

Janey was a single mom of a teenager. I’ve known her for many years though I don’t know her very well and I don’t really know much about her circumstances, except she was younger than me when she had her child and I think she was in a relationship at the time.

“Because I don’t know if I would,” Janey continued. “It’s really hard. I’m really, really missing having a partner these days.”

She nodded and tried to smile. “Right. I guess I’m at a stage where I am wondering how I can teach my teenage son how to treat women in a relationship. How is he going to learn if he has nothing to mirror.”

It is an interesting point. A point that I heard last week as well.

I met a woman who had done a documentary on single mothers. She was fascinated by my story and asked me tons of questions. I gathered that after interviewing so many single moms, she found it hard to believe anyone would choose that life.

I told her, in my opinion, “When you choose to have a baby on your own, you are doing so because you don’t want to miss out on being a mother. It’s not a natural progression. It’s unexpected. You have to make a lot of decisions, pay a lot of money, ignore the skeptical friends and put other things on the back burner. It’s different from divorced single moms and even single moms who found themselves pregnant. There are similarities, for sure but I’ve found (in my limited experiences) the women who have sought after being a mom solo are generally more content. We Mom Solo’s by choice thought long and hard about this life and then, since it often took many tries, we longed for it and prayed for it. Please make me a single mom!!! I want my baby NOW!”

The documentary film maker was delighted by this. It made sense to her, but her big question was, “Are you concerned that you won’t be able to teach your son how to treat women in a relationship?”

So… I guess this is a real concern out there. I’d never thought of it and now that it’s been asked of me twice, it still doesn’t bother me.

“My son is in the world,” I told the filmmaker. “He’ll have interactions, watch interactions, have role models and most importantly, learn about respect and treating people kindly and treating those you love with appreciation. I think that’s a lot more than some kids from 2 parent families might get.

“Also,” I said, “How many relationships do you know of that should be emulated or modeled? A handful or so?”

I know I can sound negative about relationships sometimes – I just have seen a lot of bad ones and yes, been in some bad ones.

Relationships are hard – harder than I even know. I have actually never had a boyfriend who treated me well enough – and, actually they all came from families of married parents. So…. how come they didn’t learn how to be in a relationship??

I’m sure sometimes kids can learn a lot from watching their parents interact and sometimes they learn what they don’t want for themselves. But I don’t believe my son will grow up flailing around and not knowing how to treat another person he cares about… my son will have me to teach him a lot and he’ll have other wonderful people in his life to learn from… and as I said before, my son will be in the world – interacting with people, watching people, reading about people. I’m not worried that because I don’t live with a man, he will be lost.

Maybe I will change my tune when he’s older. Maybe. I can’t predict it. The teen years are a whole other thing, but I will be different then too. I will be the mom of a teen, with all these years of knowing my son. Maybe I will feel like I need a partner in ten years. I really don’t know. I just know I like doing it all my self now.

Janey apologized to me about twenty times, “I’m sorry to be a dark cloud.” “I’m so sorry to be so negative.” “And yes, being a mom did change my life in so many wonderful ways.” “Maybe you won’t feel this way in the future.”

Everyone is different. Everyone has a different experience. I happen to be the type of person who can be really happy as a mom solo. Circumstances have led me here and I’m really grateful. Sometimes I wonder about how my life would have been different – if I had gone to another college or chosen another profession and met a man I wanted to marry… the thought of another life makes me so grateful for this life. Not because the other conventional life sounds bad, but because I love this life I have with Spenser. And I am confidant that I will do right by him as a mom solo. 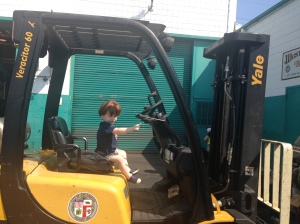 This entry was posted in SOLO STUFF, THINGS PEOPLE SAY and tagged choosing to be a single mom, mom solo, single mom by choice. Bookmark the permalink.

6 Responses to WOULD YOU RECOMMEND BEING A SINGLE MOM?