STILL SORRY I WROTE THAT…

OK, again, I’d like to apologize for this post. I know I took it back, but, I have more to say on the sleep issue:

Sleep schedules are always changing. (This may be boring to some of you… but the sleep thing is both fascinating and infuriating to me… enjoy) 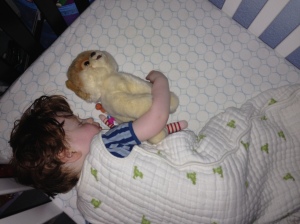 Then, a few months ago, he started not falling asleep till 8, so I let bed time get later – it gave us more time to do fun things in the afternoon. He was sleeping 8-6,  10 hours a night, which, according to the charts and doctors, is normal for a 2 year old… with a 2 hour nap.

Not long after this, Spenser started waking up at 5am and his naps stretched to 3 hours. And I think he seemed a little tired and he got a cold.

8pm-5am is not enough sleep for him – even if he makes up the hour at nap time – and it’s not enough time for me to get my stuff done and get to bed before 10:30. These last few months, I’ve been eating my words “just go to bed earlier.” Going to bed at 9 is so crazy. It is just so weird…  but when your child goes to sleep at 8, you can either eat and shower (yes, I shower at night) OR write and shower OR clean the kitchen and write… you get what I’m saying. But what I mostly did was lie on the bed watching TV telling myself I was going to get up and brush my teeth and getting nothing done and then it was 10:30 and my teeth weren’t brushed and nothing was done.

The old schedule allowed me a lot more social freedom – easier to do stuff in the  day before nap and after nap too… This schedule is harder for plans, but if my son insists on a 5am wake up (and he does) then he’s going to bed at 7.

So far, the change is better for him. He sleeps 7pm-5am and naps 12-3. I got the idea about the earlier bedtime from Marc Weissbluth. His book is dry… but very helpful. Ironically, I packed this book up and put it in storage about 4 months ago, because Spenser was such a great sleeper, I didn’t need the book anymore. Ha ha! Luckily, I’d read enough of the book a few years ago and remembered this concept: if the baby/child is waking up earlier than you’d like, try putting him to bed earlier! Not later! For Spenser, if I put him to bed later, he still wakes at the same time… sometimes earlier! There’s a chemical the body makes, in babies/toddlers who are overtired, that keeps them up. I can’t remember the details, and the book is still in my storage, but that’s the idea.

And now, Spenser will often sleep till 5:30, which, insanely enough, is nice. Sleeping till 6am sounds like luxury!

All my adult life, when I thought of having children, I imagined my husband would be waking up at 5am with the baby and he’d let me sleep in because… well, because he’s so kind and thoughtful. And he’s a morning person. Which I never have been.

And actually I don’t mind. It’s actually quite nice… because I get to snuggle with this boy and see this face: 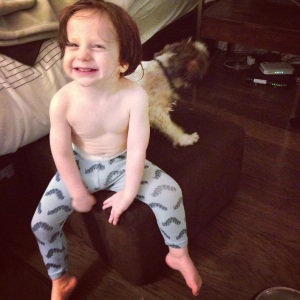 5 Responses to STILL SORRY I WROTE THAT…