Being cautious gets a bad wrap.  People love to say “everything’s gonna be fine.” And yes, hopefully it will be fine.

When I was pregnant, I read some check lists of things to do before the baby comes and one thing was to have CO (Carbon Monoxide) detectors. I didn’t have one. I’d never had one. I didn’t have any gas appliances now anyway, except my fire place, which was turned off and everything else was electric; seemed unlikely I’d ever have a gas leak, but I put the CO detector in a plug outlet. 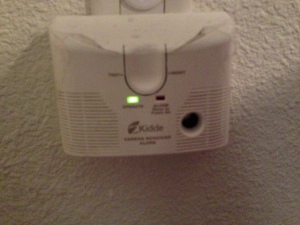 A few years later, when Spenser started crawling around, I blocked the detector with some furniture so that he wouldn’t press it. I accidentally knocked it myself and it screeched, making me feel like I should just get rid of it. But I didn’t. Still, it was blocked enough to probably cut off easy access; meaning it may not have even been effective.

Recently, I moved the table I had blocking it to make was for a big “car slide”  that we got as a hand me down.

When I walked in the door, there was a faint odor of gas. I wrinkled my nose and then sniffed hard. Was it gas? Probably not. I didn’t have any gas appliances, right? So, it was… something burning in the washer or dish washer. I opened both and everything seemed OK. Maybe it was….

Crap! Spenser’s nap. Got him to bed. Made myself eggs and sat down to read my friend’s screenplay. It was a nice overcast summer day. Not too hot, but Spenser’s room gets very hot – there’s no vent in there. It’s actually a den, I converted into a bedroom, with heavy curtains dividing it from the living room to keep out light and noise. I keep a fan going in there.

12:30: As I took my first bite of lunch, my CO alarm started beeping. Hmmm, I did smell gas when I walked in, I thought. But that’s silly, because I don’t have any gas appliances in my place.

It is SO easy to dismiss the signs of danger!! I mean, who wants to deal with danger? Not me. I had lunch and reading – and this screenplay was a perfect read for this cloudy afternoon. Must be dust in the detector. I went over and hit reset.

I went back to reading and a few minutes later the detector beeped again. Now I was paying attention. I called my dad and told him my CO detector was beeping.

We are both great in a crisis.

Dad: (after thinking for a while) Call the Gas Company.

Of course! I called them and after some time and trouble locating my place (I no longer had an account) they sent someone because it was an emergency. While I was on hold, I heard a recording saying, “If you smell gas or suspect Carbon Monoxide, make sure you and everyone in your home go outside to fresh air.” But… that didn’t mean me? Right? This was probably a mistake. Dust in the detector, I’m sure.

But, what the hell… better safe than sorry.

I threw a few pillows outside with the ipad and a towel and scooped Spenser out of his bed. He was disoriented and unhappy.

1:00 pm: We waited about 15 minutes for the gas co worker, Nshan, to show up (pretty fast!). I was ready to hear Everything’s fine ma’m. Try to keep dust out of here. But Nshan took his machine in my place and rapid beeps sounded. Nshan said, “Wow! These levels are very high!”

I instantly felt validated. I wasn’t overreacting! I was careful and cautious and RIGHT! ~Such a fine line between a hero and a paranoid, over protective asshole, right?

Nshan asked about the gas appliances in my place. None, I told him, which made him check the keyholes of my neighbors. “Oh my lord,” he said. “Very high!”

1:15: While Spenser adjusted to the situation, I called my HOA and had to leave 2 messages for different people before I finally had the receptionist page someone. “It’s an emergency,” I said.

The HOA rep, Lola, who I’d dealt with many times, came to the phone. She often has a laissez faire attitude about problems. “Oh, wow. Let me know what he finds,” she said, in keeping with her usual rap.

Spenser and I waited as Nshan ran around testing doors and then pounding on them if their levels were high. He was afraid that people were DYING inside!!!

“Your downstairs neighbor’s levels are VERY high too,” he said, “Can we get into her house?”

“Nshan is afraid she’s dead in there,” I said, with a great deal of urgency as Spenser whined and rubbed his eyes, still so tired from nap interrupted.

If I was out and came home to find my door was broken down by the gas company because they were afraid I was dying… I wouldn’t be angry. I’d feel safer. Just saying.

“Hmmm, she said, “Well I have her email. I will email her and tell her.” (A lot of good that will do if she is in there…)

“You know, notes should be going up here,” I told Lola. “There should be notes everywhere saying that if you smell gas or even if you don’t your home may have high levels of Carbon Monoxide!”

“There should also be notes going out telling people to get CO detectors! I don’t hear any beeping from any of these units that Nshan says have high levels of CO.”

“Can I have “Nshan check your CO levels?” I asked.

He did. They were super high.

She seemed bothered by this but not freaked out like I was. We exchanged numbers so she could text me for updates.

I was alone in this big complex. Most everyone was at work or somewhere. Where was the handyman or someone from the HOA? Did the board know? Did everyone feel OK letting one man from the gas co handle this huge building by himself? It was strange to be sitting there alone with this guy. He kept asking me questions:

“What are the common area gas appliances here?” “Was anyone having their carpets cleaned today?”

I was pretty sure there was a gas water heater, but that’s all I knew.

I called Lola again. Nshan was talking so fast. He was frantic. He was nervous. I put him on the phone with the her. They talked for a bit and I heard him explaining the urgency of this situation again.

2:30: Nshan ran around a bit more and then told me he was going down to the garage to try to break in to the water heater to turn off the gas. If the levels of CO went down after that, he’d know that this was the source of the problem.

In the mean time, Spenser and I were sprawled out on the walk way which was dirty. “Feet dirty,” he kept saying as he kept taking off his pants. We were dirty, I was smelly and we couldn’t go inside our home, though we were five feet away. “Being inside there for a minute gave me a headache,” Nshan had said.

I held my breath and ran inside to get his blue chair and a bag of crackers.

3:00 Nshan came back. “I can’t get into the water heater,” he said. He’d been there almost 2 hours and I wondered why no one from the building had  shown up yet. I mean, seriously!!! Do people know and understand that Carbon Monoxide poisoning is deadly?! WTF????

“If I can’t open the water heater I’ll have to shut off all the gas in the building.” Nshan told Lola. She found the code that helped him unlock the door to the gas.

3:30: So now, all alone again, we found ways of entertaining ourselves.

4:00 Nshan came back, “I turned off the gas,” he said. “We will check the levels in your place in 30-40 minutes.” Then he continued to walk around the building; checking stuff and doing stuff.

It was still just Nshan, Spenser and me.

6 Responses to THE CARBON MONOXIDE CAPER