When  I was about 5 months pregnant…

“Everything looks great,” my OB said. I’d known my OB since I was 12. We went to middle school and high school together and we were on the gymnastics team together and now she was doing my pap smears. Ah life.

My OB continued, “I want to talk to you about a new Whooping Cough epidemic. It’s serious. There have been some infant fatalities so I strongly recommend that you and anyone who will be holding your baby get the new whooping cough shot.”

“Everyone who is going to hold him?” I asked, just dreading saying to dear family and friends that they had to get a shot or not hold the baby they were so excited to meet. Ugh, such a drag. Just what I wanted to do… ask people to go get a shot!

Knowing my OB for as long as I had, I knew her to be pretty easy going. When I asked her questions, her usual reply was, “It’s fine.” “Don’t worry,” or “It’s not a problem.” so when she was adamant that this was important, I knew I had to trust her.

I went home and googled this epidemic. There were many cases of Whooping Cough, due to more people not vaccinating and there were infant fatalities… near me.

The pediatrician I chose said the same thing about those who wanted to hold the baby getting the shot.

Over the next few months, I got the shot and told my family and friends about it too. I dreaded telling them. I mean, who wants to go out and get a yucky shot? But many friends and family did it. Some said, “I understand, but I don’t think I’ll get it and I’d love to hold the baby when you feel it is safe.” And then, there were some friends who told me I was crazy.

My family all got the shot immediately, no questions asked. Many of my friends got it too. It was very touching.

The guff I got was from a few other mom friends, with older kids. “I have never heard of a whooping cough epidemic!” they’d say. “You are too over protective,” and even “Relax!”

My hormonal body would start raging and my rational mind would tell me to let it go.  “You don’t have to get it!” I’d tell them, trying to stay calm, but failing. “I’m just telling you what my doctors told me to do!” 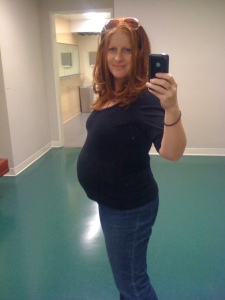 One night, I was at a party and heard a few friends talking in the other room.

“Over reacting… shot…. it’s crazy…. I never had to make my friends get a shot to hold my baby.”

I was 8 months pregnant. My body just reacted – heat to face, blood pumping in ears, mama bear fury… they were talking about ME! Did they know I was in the next room? Did they care? I walked about five feet over to the group and gave them an earful, “I’m RIGHT here! Did you know that?” I shrieked.  “AND, I’m not asking you to get the shot!! I’m just saying my doctors told me not to let anyone hold my baby who didn’t get the shot and since I chose these doctors, I’m going to trust them.”

My friends nodded and smiled. I’m pretty sure they’d never seen me like this. This reaction was out of my control. Wow. I couldn’t hold myself back. I was really raging.

“And…. there was no whooping cough epidemic when your kids were born! That’s why you didn’t need the shot!!!”

I wanted to storm out of the party, but I was able to calm down. My friends were loving and apologetic. It’s still hard for me to look back on this story with perspective, but I imagine it wasn’t the enormous scandal that I experienced.

I always wondered how and if the whole thing would have been different if I had a husband; you know, a strong man’s voice giving my irrational hysteria some grounding… Maybe not.

I think the key is that moms (including myself) feel protective and defensive about other moms doing things differently; like we are judging each other or criticizing each other. This whooping cough shot was like a button being pushed saying “you didn’t do this for your kids,” which no one wants to hear.

It’s sort of like the whole TV thing. I laugh when I hear moms of young children talk about television! They always have to add, “But we hardly watch TV,” because they know everyone judges that!! I let my son watch shows. He is learning songs, words, characters… TV brings up new concepts and questions. Recently, he saw an episode of Curious George that got him excited about puppets, where just seeing puppets live hadn’t.

It’s hard for me not to add, but we don’t watch a lot of TV… because I know there are some judgers. But I’m not going to qualify it at all.

But I want to.

2 Responses to THE WHOOPING COUGH SHOT