I have such fond memories of my babysitting days, taking the little girls to see the fish, sharks and penguins. Going to the cafe and having something fried for lunch, then the little ones falling asleep in the car on the way home. So sweet and fun.

So the day came. This was it. We were going and S was excited. He’s at the age now where he really understands stuff. I told him about how I used to take T (the little girl I babysat, who is 13 and he now loves) to the aquarium. I told him the things we were going to see.

“No troller” he tells me, which is understandable because he loves to be carried. But I brought it just in case.

S was instantly enveloped in the dark hallways of lit tanks. “What that?” he pointed at everything. I told him names of things until he came to one tank that was particularly fascinating; an arm was coming through the back of the tank with a vacuum and was sucking up, I’m guessing algae and poop. We stayed here for a long time.

We looked at bat rays, otters, penguins, sting rays, sharks, sea turtles and myriad other creatures. “I like it!” S would say to me, smiling.

The real highlight was when a fish tank was being cleaned by an actual scuba diver. He was wiping the glass, fully submerged and blowing bubbles. “I do that! I go in there!” Spenser cried, thrilled that maybe he’d found his calling.

And I felt complete. I felt I was good at my “job” and appreciated. I felt happy and full. Yeah. That’s all it takes. Well, I was full, emotionally, but, I was hungry.

The smells of fried food had been calling me all morning and I told S it was time for lunch. I was starving. My child barely eats (the 2 year old thing) but I knew once we had some fish & chips, he’d eat. I mean, he likes fries and he’s eaten and liked fish sticks before.

Ordering fish & chips at the aquarium is weird, right? It’s like eating hamburgers and hot dogs at the zoo. But I been thinking of fish & chips all morning. I’d never had them here. I guess watching them swim all morning put me in the mood. I can’t remember when I’ve ordered a full plate of fish & chips last. I’m guessing in London in 1999. I don’t eat that way. I’d like to, but I can’t. I’m one of those people who’s weight fluctuates so fast… it seems like my short frame can gain 5lbs in like a week!.

But I wanted this.

It came piping hot, with lemon and tarter sauce. I was taken back to my younger days of  frequent fish and chips eating, remembering happily times at the Marina, with my family. 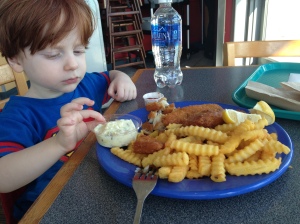 It might not look like much here… well, that’s what I thought at first. I broke off a bit of the fish for S. Letting it cool. I squeezed some lemon on the fish for myself, letting some of the juice drip over some fries. I dipped a lemony fry in tarter sauce then ketchup. Delicious.

Then, I tried the fried fish.

This was the best fried fish I’ve ever had, you guys. I mean, seriously. The crust was so light and crispy and flavorful. It was greasy, yes, and to me, that just makes it better. The fish it’self was so moist and flaky. The tang of the lemon, the creamy, pickley tarter sauce the crunch of the fish. Then a perfectly crisp/soft combo of the fries… and one piece of fish was gone.

Oh, what was my son doing? Eating some apple I’d packed. He tried the fish. He said it was good and he had a second bite. Then he ate about 3 fries. He climbed on the chair and pointed to fish decor and I was lost in this oily crunchy indulgence.

Why does the f’ing aquarium make the best fish & chips? It seems so wrong.

I couldn’t stop eating. I ate till I felt sick and full of grease. I ate till I was beyond full and it was gone. I went to another world; an addictive, fatty one. Within seconds, I felt the rolls around my waist enlarge. I’m so glad I only wear sweatpants now (it’s my new thing.) And then I felt sick. Like nauseous and gross and sort of dizzy. But also kind of great because it was so delicious. And the whole way home I obsessed on how many calories I’d consumed which made me wonder if it negated the enjoyment I’d gotten from eating it in the first place.

So now, I feel like I’m bursting out of my casing. Everything smelled like tarter sauce (like after you just change a big stinky poop and everything smells like poop for hours even though it’s gone.)

I just can’t wait to go back to that place. I mean, they had fish tacos too.