I’ve missed you! I haven’t written since I ate all that fried fish and chips and yes, I actually did gain 10lbs and I’m still working it off.

These last few months I’ve been focusing on finishing my book… and I have. I will post a chapter soon.

Today, I went to a party at my Trader Joe’s. It was an aPPpetizer Party to celebrate their new TJs APP. My husband is so clever. (In the last few months, though I haven’t been blogging, I’ve gotten many new readers so I will explain – though I am a single mom, when I was pregnant, I was told by a baby class instructor that Trader Joe’s was going to be my husband. It actually turned out that I did fall in love with and marry Trader Joe’s so now he is my husband… as much as any store can be one’s spouse.)

The APP party was promised to be a good time with lots of samples and games. I imagined samples at every turn and games in all the isles and balloons and musicians….

Maybe it was because we got there at 10am or maybe not, but it wasn’t that roarin’. 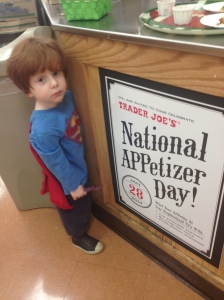 There were only 2 appetizers at the sample area. That’s it. And there was one game – it was a spin the wheel for a prize; everyone’s a winner. This game excited me. They were giving out lots of food as prizes – free frozen appetizers, free bath salts and other left over holiday limited editions.

I have a thing for Trader Joe’s, yes. But.. I also have a thing for FREE. It’s so deeply ingrained in me, it’s crazy. If I get something good for free, it gets me high. I don’t mean presents. I like presents, yes, of course, but let’s say there was a thing I wanted… like, um Moroccan Hair Oil or something, if someone gave it to me as a gift, I’d be thrilled and excited… but if I’d won it or gotten it free with coupons or found it on sale, then used store credit from a returned gift… I’d be high! It’s so weird. I try to keep that part of myself tamped down. It’s not an attractive quality. 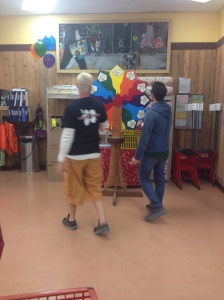 So, I let Spenser spin the wheel, of course.

It landed on a Purple. They turned the card over and my prize was….. a fruit cake. A small Italian Panettone. Yuck. Seriously, yuck and only $1.29 value. I was soooooo annoyed. 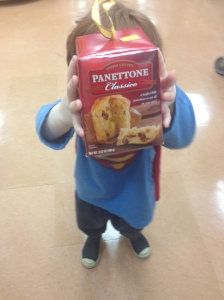 “Mmmm, it goes so well with coffee,” my crew member said. He had to be lying. No one likes this thing. That’s why they are giving thousands away.

But, I bucked up and cheered for our prize, all the while wondering if I could ask to spin the wheel too… like Spenser had had his turn, now it was my turn. No. I couldn’t bring myself to ask.

I looked at the other prizes. 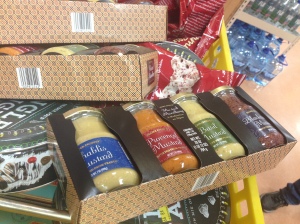 A $7 mustard set, white chocolate peppermint pretzel thins, pick any appetizer from the frozen section… I mean – anything was better than a nasty fruit cake!!

“You don’t need to eat more white chocolate peppermint pretzel thins,” I told myself, thinking about the bag I’d eaten over the holidays.

“I want this!” Spenser said of his prize.

Great I thought. Just let him eat the whole thing now. Get it out of my sight. It only reminds me of my missed opportunity.

I opened to box and let him bite into the whole triple sized muffin.

Then I heard a lady bragging that she exchanged her Panettone for a reusable shopping bag. 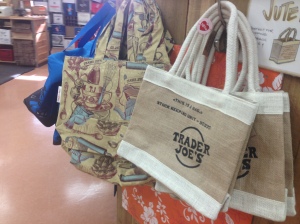 And besides, my crappy Panettone was open and bitten and unreturnable.

I took a few deep breaths and looked at my child.  He’s really the only prize I need.