THE CIRCUS AND THE BEST ACT

S wanted to go to the circus. Thanks to children’s programming (mostly an old Mr. Rodger’s episode I rented from the library) and a few circus books, the circus was in order. So I found a non animal circus was in town and bought tickets. I got a good deal on living social – I didn’t get the cheap bench seats or the nice reserved seats, but I got the middle open seating seats.

I drove very far and got there early. We parked in a dirt lot next to the big top. We were so excited for our adventure – the clowns and acrobats (no elephants or tigers… I couldn’t do it. There was an animal circus option in town too, that promised humane treatment and yet – I still couldn’t do it.)  I’ve become fascinated by the circus life – the travel in trailers, the career circus families, the way they all do many jobs -and the crew travels with them and life on the road. I romanticized about Night Circus.

I was determined to have the full experience, so when we arrived, I let Spenser buy a $5 cotton candy. After a few excited bites, he declared, “Me not like this,” to which I was thrilled. Then, I bought him the light up sword he wanted, for $10 (which I’m sure cost them thirty cents from Oriental Trading Company – now falling apart so rapidly, it’s a joke. I have 3 huge piece of tape on this 1 day old sword.)

There was a cute pre show where the kids got up and juggled scarves and balanced feathers on their palms. Then, when the show began, I bought a $7 popcorn – stale and from a bag.

The acts began – dancing, magic, juggling, acrobats…. a modern clown without clown make up, which I had to keep explaining was really a clown, because S kept asking, “where are the clowns?” Then they came around and showed me the photo they’d taken of us and I bought it for $10. 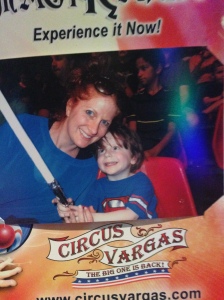 Then, I finally gave into the please may I have a snow cone in a flashing light up glass?request. For $8. He loved it for about 10 minutes… then he was done and that red stuff became my nightmare. The red liquid got all over my white pants! Why did I wear white pants to a circus? Because I’d never been to a circus before and didn’t realize how dirty they are! Coming from a theater background, the circus is not the theater… it’s dirty like a carnival with seats. I’m pretty sure my nice white pants are ruined. They are soaking in stain remover now and meanwhile, this morning, S’s hands, lips and legs are stained with red snow cone juice. His body is STAINED like he’s been slapped! 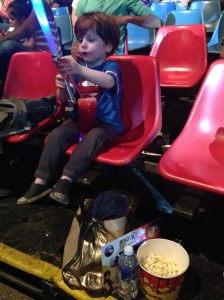 For most of the show, S sat on my lap. I hugged him as my mind wandered: how old are these costumes? do they stink? what are the auditions like to be in the show? are any of these performers born into the job? who hates each other in the cast? are they just so sick and tired of this show and traveling? are they all backstage like “oh good, the drum act is up, I have time for a smoke”? why is the ring master constantly fiddling with his head set microphone? should I have gone to the circus with animals? would it have been more circus-like? is Spenser enjoying this? how much money have I spent/wasted? this is a very racially diverse cast. wow, that woman is so masculine and that man is so feminine. the arena is maybe 60% full I wonder if they are in financial danger. well, they must make a fortune on the light ups swords and stale popcorn – so I’m glad I wasted all my money on this crap because it’s like a circus donation. the performers seem tired. ooops that trapeze performer fell into the net and didn’t even try the trick again.  can I bleach my white pants?

And then Spenser said to me, “Mom, can I watch PBS kids?” (which is an app on my phone!!!!)!!!! He hardly ever asks that – just when I bring him to a boring meeting or something. In this case, a man was flipping in the air to very loud music.

So we stayed to the end when he proclaimed, “I want more! But where are the clowns?”

The clown is here in white. The other guy is the lead magician.

But let me tell you about the BEST ACT of the whole night:

Before the show, I noticed a mother sitting with her children on a picnic bench. She’d brought them dinner in styrofoam cups and was calmly chatting with an old man who’d stopped by to talk of his days of a performer. I stared at the woman and her children as I counted – 6. This woman had 6 well behaved, seemingly pleasant children from ages about 13 to 2. There were no twins. It seemed like they were all about 2 years apart. The woman was attractive, calm and smiley. The old man she was being so nice to had approached me earlier and though I was pleasant to him, I didn’t let him engage me in his stories. I smiled at him and nodded but moved on. This mother of 6 was being SO SWEET to him! As she talked to him I listened and heard that she also grew up in LA and lived not far from me. She was the smoothest juggler I’d ever seen, with 6 kids and an old man high in the air, catching each one without effort.

Here I am a single mom with 1 child and everyone worries about how hard it must be for me. All parents with 1 or 2 kids freak out and stress out and complain and need help and here’s this woman, by herself with 6 kids.   And yes, I’m sure the older ones are helping out now, but still there was a time when she had a bunch of little ones. And yes, maybe they have a lot of money and have help during the days… but they were in the cheap bench seats in the back. 7 tickets at $20 is still a lot. I didn’t see those kids with red stained faces or light up swords, but she did take photos of all of them with the performers. And do kids really NEED all the crap I bought S? Nope. I wish I hadn’t bought any of those things.

I like to imagine that the mom of 6 is a great mom, a loving mom, with boundaries and rules and positive reinforcement. I imagine that it just works for her. I imagine that she doesn’t have a nanny and has done most of the parenting by herself (she was wearing a ring, but there was no husband at the circus – works long hours?)

Who knows what her life is like, but her demeanor that night was relaxed and happy. She was the fire eater who didn’t break a sweat.

When people ask me if it’s hard being a single mom I always want to say actually, it’s easy, but that tends to enrage people, so I just say “no, we are doing great.”  I mean, all parents have challenges, but I don’t feel that mine are harder than anyone else’s. So if you just accept that all parenting is fully engaging and at times difficult, then me saying it’s easy is relative, of course.

I now have this image of this mom of 6, making it look simple and doable and FUN! Yep. Being a mom is fun. She was flying through the evening with the greatest of ease – the mother of six on the flying trapeze. And this mom didn’t fall, but if she had, I’m sure she would have climbed up and tried again. I want to believe she doesn’t have nannies or a lot of money and she just does it well because she loves it and she doesn’t stress out about little things.

On the way home from the circus, S fell asleep in the car and I ran over an orange construction cone on the freeway. I pulled over to a gas station and tried to crawl under my car and pull it out. Luckily, there were 2 construction workers who saw me and came over to help. It took both of them to dislodge the cone as they said, “we run over them all the time too.”

I said single motherhood was easy, but I never said that I didn’t need a little help sometimes.

12 Responses to THE CIRCUS AND THE BEST ACT