This is a re post from a few years ago…

The day of the election, I was assigned to a polling place in Malibu-  it was a country club or something. I was paired with a young, petite, guy named Jose. He was in college at UCLA – we were both Bruins!

In California, you are allowed to campaign at the polls but you need to be 100 feet away from the entrance of the polling place, so you are not practicing illegal electioneering. Not many people know this, but our No on Prop 8 organizers did.

Jose and I spoke with the (very old) volunteers before we began and they offered us cookies and lemonade. “I don’t know why more organizations aren’t out here for their causes,” one of the volunteers said.

I was nervous. I didn’t want conflict. I was hoping to just remind people what the bill meant; many people got confused on this one… did No on 8 mean no on equal rights or no on the people against equal rights?

We were in Malibu! This was going to be pretty easy – lots of laid back wealthy Hollywood types and beachy hipsters. 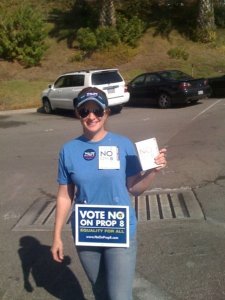 What unfolded in the next few hours was soul crushing.

We got a few thumbs ups, but a lot of  fist shaking and yelling. “You aren’t supposed to be here!”  “What you are doing is illegal” were the most common rants.

“Actually, it is legal,” we would explain, to those who stuck around to yell at us. “As long as we are 100 feet away from the polling place.” Most of the people didn’t believe us, as we found out later when the volunteers told us how many complaints and requests to call the police they’d gotten.

“No on 8 is No on Hate!” I called to a beautiful, fit, tan heterosexual couple, holding hands.

Her male body builder partner stopped and turned around and power walked to pocket-sized Jose and me. “I don’t hate anyone!” muscle man raged at us. “Just because I don’t believe gays should get married doesn’t mean I hate them.”

OH JESUS! I wanted to scream back: Yes it does! If you don’t want people to have the same rights you have, it is hate. But I couldn’t speak. I was paralyzed.

“We are just trying to remind you that a no vote on 8 is a vote for equality,” Jose said simply and calmly.

The bronze god ranted some more non hate about not caring if gays want to be together but marriage is between a man and a woman, while his (I’m sure very well treated) girlfriend, pulled him away.

An old man walked by. I wasn’t going to say the hate word again. “No on 8 is a vote for equality,” I sang happily.

The old man turned, pointer finger raised. “Are you telling me I should vote for a man to marry a man? Garbage!” He was all worked up. “Married people are supposed to make babies. That’s why marriage exists. Can two men make babies? No!” He was screaming.

My blood boiled and I wanted to sob. I looked at Jose. He was calm and friendly. “OK, Sir,” Jose said. “I understand that’s how you feel. Have a nice day.”

“And some of these gay men are having babies together! Two women too. There are two men in my neighborhood who are raising a child together; it’s unnatural. It’s disgusting and ruining our country!” He was turning red. “Are you one of those gay men?” he asked Jose.

“How about you, huh?” he shot that ancient, accusing pointer in my direction.

I trembled. I hate conflict, but mostly I wanted to strangle him. I tried to absorb some of Jose’s poised detachment… but I couldn’t. “It’s none of your business and it doesn’t matter what I am!” I shouted from my gut, forgetting to breathe. “I’m a human being. We both are.”

“Blech, horrible. Ruining the world!” The old man spewed and then walked to the polls, shoving his Jaguar keys in his pocket. How can anyone deny that this was hate? Even if bodybuilder man thought it was fine for homosexuals to be together, he was on this old man’s hateful team. There’s no well, I sort of agree here. You are in or you’re out.

I looked at Jose. He shrugged, “Oh well, guess we didn’t get his vote.”

I was stunned by Jose’s grace. I was awed by his lack of hurt feelings. He was so young and he was so strong. I tried to absorb his might, but I couldn’t. I was crushed. I was sad. I felt hopeless.

Today, as a mom solo, I know there are a lot of people who look down on the way I’ve chosen to live my life. A child needs to be raised by their mother and father, many say. Lest we forget when Mitt Romney made the connection between single moms and gun violence. And the long list of supportive comments below this video show he’s not the only one who feels this way.

OK, we’ve got that solved.

Jose’s strength inspired me. I know what’s right and I am happy. I’m living my life with grace and not hurting others by my choices.

Thinking of you, Jose, wherever you are. 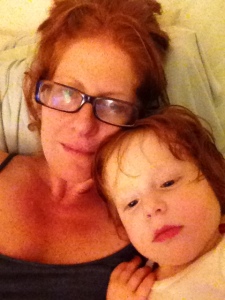