Spenser’s friend was sick so our playdate to the park was cancelled. Yep, I was going to go to the park, even though it was already blazing hot!

It was 8am. Spenser was pulling toilet paper pieces from the protective toilet paper child proof cover, throwing the swiffer around and pulling clean clothes out of the dryer. There was a pile of tea bags, some bags of pasta and various Tupperware all over the floor from Spenser’s pantry. We needed to get out of the house before I knew his entire nap would be spent cleaning. 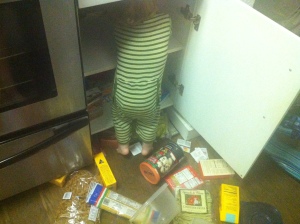 “Let’s go do something fun,” I told him, knowing my early morning options were limited.

I was planning on going to the park but I found myself driving to Trader Joes. I couldn’t help it. When we entered the store, we began our routien:

Banana. Visit Polly at samples. Mama gets coffee. Spenser shouts “go go” and I let him run down empty isles, keeping close incase a shopper rounded the corner. Then he sorts avocados and touches the cold produce refrigerator.

“Where’s his name tag?” all my crew member friends asked.

“I left it at home. Sorry!” I didn’t mention that I wasn’t there to shop (though I always buy something.)

A few of the crew members had photos of him with his name tag on their phones or cameras so they showed it around to the customers watching my busy guy.

“Hi Spenser,” four different older women shoppers called, as he ran around. How did they know his name? I guess I’d told them before. They did look familiar.

As he ate, ran, and socialized I found myself chatting with these stranger friends and saying things like, “He loves cheese,” and “I think he has a poopy diappy,” and “He said go go which means he wants to run,” and stuff like that.

“See you next Friday,” Betty waved as she left with her mini cup of coffee.

Suddenly I realized, I was in a Trader Joe’s coffee clutch. Was I coming every Friday? Yikes!! I wasn’t trying to come every Friday!

I have always judged those people – the ones who hang out at a store with other customers and employees like a real life, less funny Cheers.  I’ve always thought that people who hung out in stores regularly had no life and no other friends. But here I was, making some casual friends, having a chat with some genuinely nice people and sharing a little coffee. What was so bad about that? I have tons of friends, you guys! I really do! So, here I am, rethinking my judgements.

Anyway, none of the ladies in the coffee clutch knew MY name. Only Spenser’s. So I’m not really in.

“What’s your name?” Betty called back.

“Evie,” I said with a smile and wave.

I’m in the coffee clutch.

Have I mentioned that there are some really cute young guys that work at my TJ’s too?

This entry was posted in FOOD, MOM STUFF, TRADER JOE'S. Bookmark the permalink.