THE BACHELOR AND THE MERMAIDS

I’m really into the whole gender fluid  movement. Who ever decided that boys wear pants and girls play with dolls and boys can’t like pink and girls can’t like baseball, really did a number on our society. And yet, it’s worked. It chugs along…  people laugh or give knowing glances if a boy likes to wear dresses. People mumble tomboy at the girl who wants to play with cars.

I want Spense to like whatever he likes. No judgement – although there are restrictions on weapons. Toy weapons, of course… and he is drawn to weapons, which, some might say is gender appropriate.

So you can imagine my delight when he asked me, “Mom, do they make toys of Ariel’s sisters? Because I really want them.”

When Spense takes a bath, we play with Eric and Ariel toys from The Little Mermaid and often some other forces come in to the game like purple squid, K Crock and sometimes General Zod. One time, Batman and his boyfriend (a farmer toy who Spense named Rosh Hashana) visited the ocean kingdom. Love is Love in the sea, as it should be everywhere.

I’m always Ariel and Ursula. He won’t play any of the females (we are working on that).  The games always include Eric and Ariel’s deep love. Sometimes they are married, sometimes they are dating and sometimes Ursula is trying to split them up. Lots of drama and intrigue; plots driven by him. Females played by me.

The mermaid sisters arrived for Hanukkah. I couldn’t believe how excited he was to get them. He hugged me tightly and thanked me profusely and said, “Can I take a bath right now so we can play!?”

The fact that we can only play with the mermaids while he is in the tub is hysterical. They aren’t really even bath toys.

I filled the tub and he got in, parting the sea of tiny white bubbles as he splashed down with an excited giggle.  “OK,” he said. “Tell me each sister’s name and then line them up here,” He pointed to  the tub ledge.

I knew the mermaid sisters all had A names, so I tried my best. “Adrina, Adina, Alana, Arista, Alissa and… Adella. And Ariel, of course.” There they were, all lined up.

He gleefully pulled Eric out of the water and donned his lower, mature voice, as Price Eric. The game had begun. “Um, hello ladies,” Prince Eric directed to the mermaids, who lay on their backs.

“Oh, hi Eric,” I said in seven different voices. He made a disapproving face at the mermaid with a New Jersey accent. Then he continued.

“Ummmmm, Ariel, may I speak with you,” Prince Eric said, with all of the confidence and composure of a royal leader.

“Sure,” I said as Ariel. And I, as Ariel had no idea what fresh hell I was walking into.

“Ummm, Ariel… I need to break up with you,” Prince Eric said, his painted smile never wavering.

“What!? Why? Eric, we love each other!” I/Ariel said. This had really caught us off guard.

“Well, it’s just that, all of your sister are here and I really think that some of them are prettier than you and I want to ask one of your sisters to be my new girlfriend.”

I was blindsided. I didn’t know whether to laugh or cry or blame myself for being a secret watcher of The Bachelor.  This was now a teaching moment. My 4 year old son was about to learn how to break up with a mermaids, like a mensch. “That really really hurts my feelings, Eric.” Ariel said. “Our relationship was based on more than just looks, so when you talk about others being prettier than me, that makes me so sad. And it would be extra hurtful if you dated my sister! She’s my family. And sisters, as a rule, don’t date the same people.”

“Ummmm…. wait wait. Time out, OK? Mom, I don’t want her to say that,” Spense said. “I just really want Eric to date one of the sisters but I don’t want Ariel to say she has hurt feelings.”

Not to gender associate, but…. I’ve heard sentiments like this in my lifetime before.

“OK,” I said, “Then let’s find another way to end this relationship. Being respectful. Do you understand it would hurt someone’s feelings to not want to be with them because of the way they look?”  I wasn’t going to get into the laws of attraction yet. That’s much later.

“How about if Prince Eric realizes that they want different things in their lives…” What other break up excuses have I used?  “Or if they’ve just grown apart and he really wants to be friends.”

We resumed the game with an amicable break up.This time, Ariel was not only unscathed, but relieved. He asked me to dial that part down. Prince Eric went back to the mermaids, who’d he’d now placed in a plastic cup of bubbles. “Pretend they are in a hot tub,” he said. (I swear, I only watch The Bachelor when he’s sound asleep!) 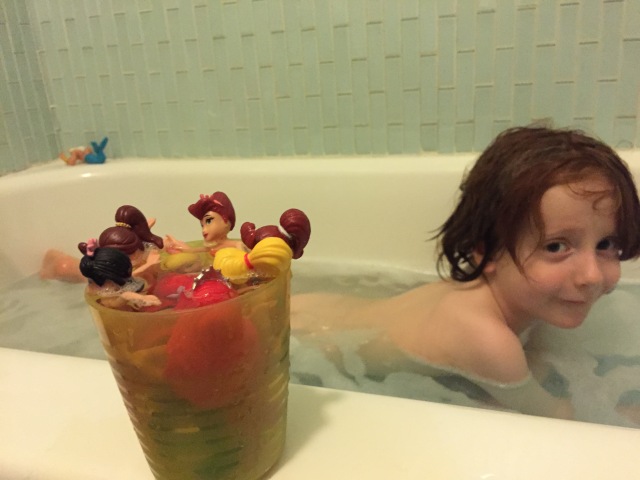 Prince Eric approached the hot tub and said, “Ummm, Adina, may I speak to you?”

Adina happened to be the one with the New Jersey accent, which I was promptly asked to change to just normal.  “Um, Adina,” Prince Eric said, “Would you like to be my girlfriend? I just broke up with Ariel.”

Oh God. Flash back to college when I told the guy I was secretly into that I’d just broken up with my boyfriend. Ironically, this was at the same time I was dressing up as Ariel at children’s birthday parties.

“Oh,” Adina said in a very normal voice, “Thank you for asking, Eric, but I could never date someone my sister was in a relationship with…sorry.”

Prince Eric was surprised but not forlorn. He looked back to the hot tub of fish fins and asked, “Um, do any of you want to be my new girlfriend?”

The mermaids were silent, except for Ariel’s comment, “It’s not really sensitive of you to ask this in front of me…”

“Mom! Time out!!” He was beyond frustrated. Why wasn’t I letting Eric have his way with all the mermaids??!!

“Why don’t we pretend that some of these mermaids aren’t sisters with Ariel,” I suggested. “And Prince Eric can ask one of them out on a date so he can get to know her. And he can ask her on a date away from the other mermaids so he won’t hurt anyone’s feelings.”

Spense was slightly annoyed and also glad to be getting on with the game and on with his plan to have Eric date someone new. He was so over Ariel. Was it something she said?

I know I question this a lot but… does my being single make him more obsessed with dating and relationships? It’s neither good nor bad… I just question. And I can’t help getting into gender differences now but… I don’t know any other boys his age who have been so obsessed with marriage and dating since they were three years old. But I know lots of girls who have been.And I know little girls who would never think of it.

And, as I’ve written here before, Spense got married quite young.

“Spense, what would you think if I had a boyfriend?” I asked.

“Grrreat!” he answered. “And… a little bit… um, this is a bad word and a very strong word – stupid.”

He shrugged and smiled.

It’s really hard not to gender stereotype. I love the idea of letting a child be who they are and like what they like. If Spense wants to play The Bachelor with Mermaids, that’s fine. Obviously it’s a popular concept. Strange, hideous and horrible, but somehow deeply rooted in us. No matter what gender. Do we all just want to date a few dozen people at the same time to find the perfect one, as they fight each other for us? Or do we just like watching other people do it to feel better about ourselves….

Whatever… it’s a great show to fold laundry to. 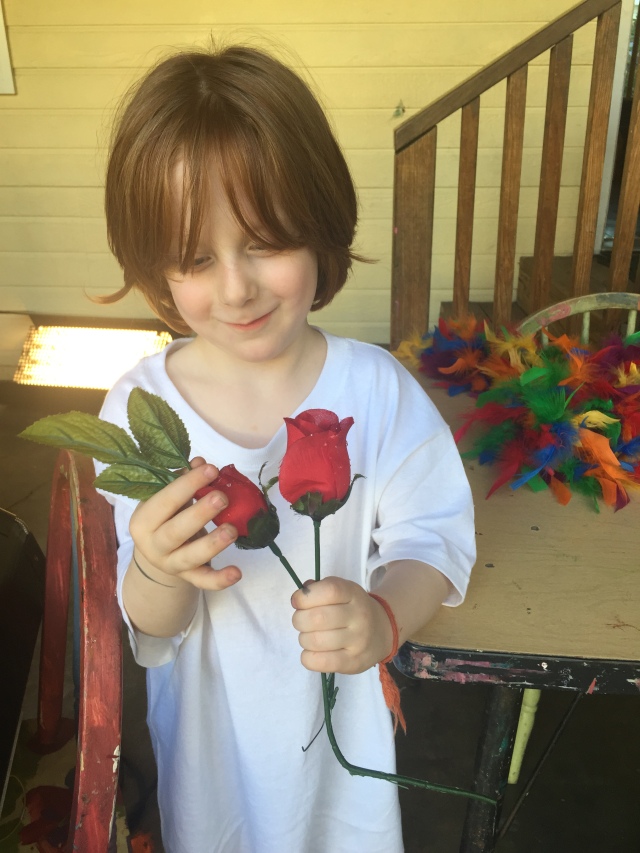 Will you please accept this rose?

4 Responses to THE BACHELOR AND THE MERMAIDS